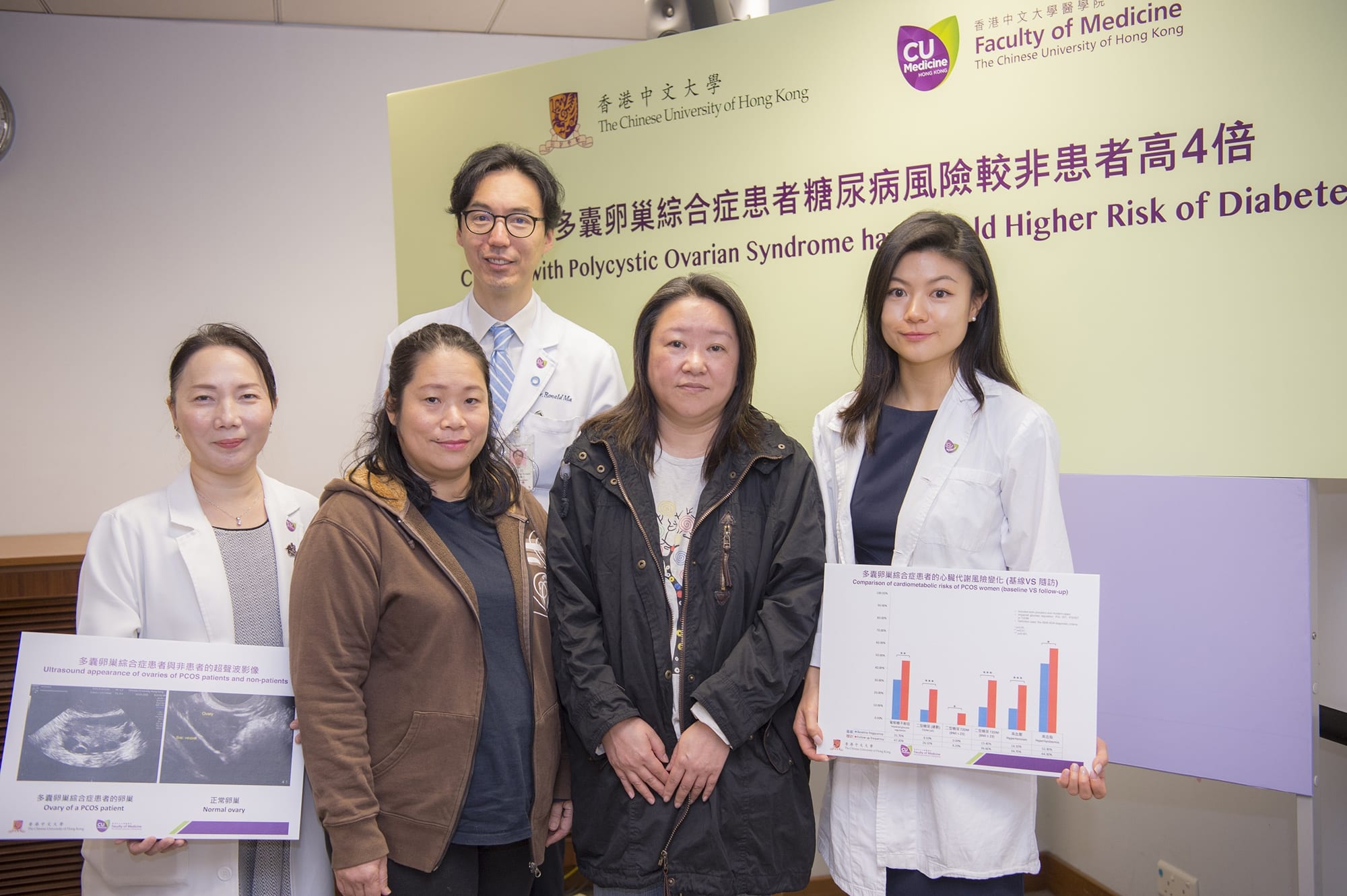 A recent study conducted by the Faculty of Medicine at The Chinese University of Hong Kong (CUHK) revealed that Chinese women with polycystic ovary syndrome (PCOS) are at 4-fold higher risk of developing type 2 diabetes mellitus (T2DM) compared with those without the disorder, and also have younger onset of diabetes. Experts recommend Chinese PCOS patients to receive regular screening with oral glucose tolerance tests and regular monitoring of blood pressure and lipids to reduce the long term health risks of developing diabetes and cardiometabolic diseases. The findings have been published in the international journal PLOS Medicine.

Women with PCOS have a higher risk of cardiometabolic abnormalities

PCOS is a common gynaecological endocrine disorder affecting 6-12% of women in the reproductive age group. Patients usually present with menstrual irregularities or anovulation. Other clinical symptoms include infertility, and symptoms of androgen excess such as hirsutism and acne. They usually have the ultrasound appearance of multiple tiny cysts in the ovaries. The pathogenesis of the disorder has not been fully elucidated, but some suggest it may be due to the elevated androgens mediated through excess secretion of luteinising hormone or insulin resistance.

Dr. Lai Ping Cheung, Clinical Associate Professor (honorary) of the Department of Obstetrics and Gynaecology, Faculty of Medicine at CUHK remarked, “Although PCOS is traditionally viewed as a reproductive disorder, there are increasing research findings and clinical evidence showing that it is associated with a significantly increased risk of cardiometabolic disorders, such as hypertension, hyperlipidaemia and impaired glucose regulation. Patients thus have a higher risk of developing diabetes and cardiovascular diseases in the long run.”

In 2008, a CUHK research team first revealed in a study that 1 in 4 women with PCOS has metabolic syndrome and raised the concern over elevated risk of diabetes. However, there is a lack of information on the long-term risk of diabetes and metabolic problems among Asian women with PCOS. The majority of international studies on the subject are from the U.S., Australia, and Europe, and share differences in the prevalence and incident rate.

Professor Ronald Ching Wan Ma, Head of the Division of Endocrinology and Diabetes, Department of Medicine and Therapeutics, Faculty of Medicine at CUHK remarked, “One in ten people in Hong Kong has diabetes, with T2DM comprising the majority. Diabetes is a chronic disease that can lead to serious damage to many of the body’s systems, especially the nerves and blood vessels over time. We have been long aware that PCOS is linked to the risk of diabetes, but previous international studies have mainly relied on self-reporting of diabetes status or linkage through national patient registries, which might underestimate the prevalence and incidence rate of T2DM in women with PCOS. Hence, the CUHK team launched a long-term follow-up case-control study to address this question and gain new insights on how to identify patients at high risk of progressing to diabetes”

The research team from the Department of Medicine and Therapeutics and the Department of Obstetrics and Gynaecology carried out a case-control study between 2016 and 2017 to investigate the increment of diabetes and cardiometabolic risks over a decade in Chinese women with PCOS. Participants received detailed clinical and metabolic evaluation, including a standard 75-g oral glucose tolerance test. The follow-up evaluation consisted of 199 PCOS patients and 242 non-PCOS women as control.

Results showed that PCOS patients had become significantly more overweight, and an increased number of them emerged with hypertension, hyperlipidaemia and impaired glucose regulation after a decade, and one-fifth of them have diabetes. The research team calculated the incidence rate of T2DM for PCOS patients, details of which are shown in the below table:

Dr. Noel Yat Hey Ng, Post-doctoral Fellow, Department of Medicine and Therapeutics, Faculty of Medicine at CUHK, explained, “We found that the incidence rate of T2DM among women with PCOS was around 2.5 times higher compared with the local female population incidence rate, and had an earlier onset of 10 years, on average. With further analysis, we confirmed obesity, elevated triglyceride, and the presence of elevated androgens are associated with the progression of T2DM in PCOS. Under logistic regression analysis, we can conclude Chinese women with PCOS are at 4-fold higher risk of developing diabetes compared with those without the disorder.”

The study was supported by the Research Grants Council General Research Fund.